Florida’s unique history began long before it earned its Spanish-based name. By the end of the last ice age, or about 12,000 years ago, the first people were already living in the area we know as Florida. They were hunter-gatherers and moved from place to place, following the large animals, or mega-fauna of the day, such as mammoths, mastodons, bears, bison, and giant sloths. These nomads also searched for edible plants and sources of fresh water.
Several different groups of Native Americans lived in the area of Palm Beach County. Along the shores of Lake Okeechobee, two small tribes, the Guacata and the Mayaimi, lived. Those tribes might have been under the political domination of the more powerful Calusa of the southwest coast of Florida. Other groups of early Native Americans inhabited the region around Jupiter Inlet and along the coastal area south to Lake Worth.

The Spanish called the native Floridians who once lived in northern Palm Beach County “Jobe” and Jeaga. Their names might have been taken from the name of the tribe’s cacique, or chief. The name has been spelled in various forms: Hobe, Yobe, Jove, Jobe, Xega, Jega, and Jeaga. Their neighbors to the north (Martin County to Cape Canaveral) were the Ais. The Tequesta people lived in the area between Fort Lauderdale and Miami, and also possibly in southern Palm Beach County.

The Jeaga were hunter-gatherers, relying mainly on marine resources like turtles, snakes, alligators, fish, sharks, and shellfish. Their diet also consisted of fowl, deer, and other land mammals. The Jeaga often ate plants, such as mastic, cocoa plum, cabbage palm, saw palmetto, seagrape, hog plum, acorns, and red-mangrove sprouts. Palmetto berries were one of their favorite foods. They caught fish by striking them with a staff or by spearing them, then cooked and served it on palmetto leaves. During special ceremonies, the men would drink a liquid called “cassina”, also known as the “black drink.” It was a tea made from the roasted leaves of the yaupon holly plant. The leaves were boiled, and the drink was served in a conch shell.

According to early European descriptions, the Native Americans were scantily dressed. Men wore loincloths of woven straw or deerskin that were fastened in back with a kind of silk grass that gave the appearance of a horse’s tail. They wore their hair rolled in a knot at the back of the head, held in place with bone pins. They armed themselves with knives, bows and arrows, and clubs. The women wore skirts made of grass, or what is now known as Spanish moss, found hanging from trees.

Early natives built houses using small wooden poles that they stuck into the ground, bent, and then tied to form an arched frame. They covered the frame with palmetto thatch. Inside were platforms along the walls about one foot high, covered with hides.

Archaeological evidence of the existence of ancient Floridians can be found throughout Palm Beach County. The best known remnant of an Indian mound in the county is in DuBois Park at Jupiter Inlet (see photo). The shell mound, or midden, is a trash heap of shells and other refuse discarded by the inhabitants. The Jeaga, who had contact with both the Spanish and English, inhabited this site. In the late seventeenth century, they held a group of English shipwreck survivors captive in the village on the mound for five days.

In 1696 the English ship Reformation wrecked just north of present-day Jupiter. The Jeaga captured the English travelers and salvaged all material they could find from the ship. The stranded English journeyed 230 miles to reach safety at St. Augustine once the Jeaga allowed them to leave. During their travel north along he east coast of Florida, the English encountered many different Native Americans. One passenger, Jonathan Dickinson, later wrote a book describing the land and the various natives they encountered, including the Jeaga.

Dickinson wrote in his journal that his captors lived on top of a large shell mound that overlooked an inlet (Jupiter Inlet). Today, a portion of the mound is still there, across from Jupiter Lighthouse. In 1898 the DuBois family constructed a house on top of the mound. Most of the mound was destroyed, however, when the shells were removed and crushed for use as paving materials for roads. Both the house and the mound are open to the public.

Contact with Europeans proved deadly to the native population of Florida. Many Native Americans died from smallpox and measles. Some were hunted down, kidnapped, and sold as slaves. Thousands of others were killed during constant warfare with other tribes, the Spanish, and British. Over the years, incoming Native Americans from the Creek tribes in Alabama and Georgia – who would later be known as “Seminoles” – moved onto the lands of the original Florida tribes.

Runaway slaves seeking freedom also entered and hid in many parts of Florida. Looking for a safe place to live, they often joined the Seminoles. Sometimes, the ex-slaves lived among the Seminoles, but in their own villages with their own leaders. Other former slaves, however, ended up as slaves to the Seminoles. Though they lived in black villages, they had to supply their Seminole masters with a portion of the produce they grew on their farms. Blacks who lived with Seminoles learned to speak their language, dressed like Seminoles, and learned their customs. The runaway slaves and free blacks became known as Black Seminoles. Many of them became advisors to chiefs and war leaders, and fought alongside the Seminoles during the Seminole wars.

The Seminoles fought three wars with the United States. The first war (1817-1818) was primarily over runaway slaves who had sought refuge in Spanish Territory with the Seminoles. Spain granted freedom to many blacks who came to Florida. It was this freedom that caused many slaves to flee Southern plantations. In 1818, Florida still belonged to Spain. The following year, in 1819, the Adams-Onis Treaty was signed, giving Florida to the United States for $5 million.

The Second Seminole War (1835-1842) was the most famous and costly of all Indian wars in terms of lives lost and money spent. It was fought over land, the removal of all Native Americans to Indian Territory (Oklahoma) west of the Mississippi River, and slavery. In 1842, when Colonel William Jenkins Worth declared the war over, most Seminoles were either dead or had been captured and sent west to Indian Territory. The couple of hundred survivors retreated to the Everglades in south Florida.

The Third Seminole War (1855-1858) started because a U.S. Army surveying team destroyed Chief Billy Bowlegs’ banana trees in his garden deep in the Big Cypress Swamp, and refused to pay him for the damage caused by the soldiers. In 1858, Billy Bowlegs and his band of Seminoles surrendered and moved to Indian Territory. The remainder of the Seminoles refused to surrender and withdrew deeper into the southern Everglades.
Today’s Seminoles and Miccosukees of Florida are descendants of those who refused to surrender or sign a treaty. After many years of living in the swamps, they became part of Florida’s modern economy by farming, and operating hotels, casinos, and other tourist attractions. Many of the Seminoles and Miccosukees still live on reservations. The Seminole Tribe of Florida, recognized by the U.S. Government in 1957, has six reservations in south Florida. The Miccosukees, who were recognized in 1962 as a separate tribe, have three reservations. Each tribe has
its own form of government and flag. 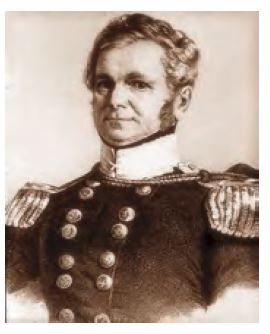 In 1841, Colonel William Jenkins Worth took command of U.S. troops fighting the Second Seminole War (1835-1842). The ware ended because he declared it was over. Worth continued to serve in the military during the Mexican War (1846-1848) and in 1847, he led troops ashore during the amphibious landing at Vera Cruz. He was in Mexico City when the Mexicans surrendered. Worth was promoted to major general and given command of the Department of Texas. He died in San Antonio from cholera in 1849. Lake Worth, and the cities of Lake Worth, Florida, and Fort Worth, Texas, are named in his honor.

A few years after the Second Seminole War began, the war came to what is now Palm Beach County. In January 1838, Navy Lieutenant Levin Powell headed a small group of soldiers and sailors down the Indian River and onto the Loxahatchee River. There they encountered a large group of Seminoles in today’s Loxahatchee Battlefield Park, west of Florida’s Turnpike in Jupiter. During the fight, the Seminoles forced Powell’s small force to retreat, killing several men. Powell’s men also killed a few Seminoles, including one Black Seminole. Soon after, on January 24, 1838, U.S. forces led by Major General Thomas Jesup fought the Seminoles near the same location. Before the Seminoles withdrew from the fight, they wounded and killed many soldiers.

After this battle, the soldiers moved a few miles east and built Fort Jupiter on what is now known as Pennock Point, about three miles from the mouth of Jupiter Inlet. Fort Jupiter closed in 1842, reopened in the 1850s during the Third Seminole War, and closed for good when that war ended.
Jesup tried to end the war by recommending that the remaining Seminoles move into south Florida and stay there, but the government refused his suggestion. He was ordered to capture all the Seminoles who had gathered at the fort to await the government’s response. Of the 678 Seminoles captured, 165 were Black Seminoles.

During the Second Seminole War, several forts were established on the east coast of Florida to supply the military. In March 1838, Major William Lauderdale led a group of volunteers and regular soldiers south to the New River. They hacked a supply trail out of the jungle to reach their destination. When they arrived at the New River, they constructed a fort, which Jesup named Fort Lauderdale. The trail, which ran between the coastal swamps and the Everglades, became known as “Military Trail.” Today, the road runs through Palm Beach County into Broward County.