There are two additional forms of local governments: the special district, and a consolidation of city and county governments. The first form provides specific needs and is separate from the county government. The other eliminates duplication of some services, thereby centralizing the government.

A consolidation form of government is where two local governments, usually a city and a county, combine functions and services, avoiding duplication. Although Section 3 of Article VII of the state constitution allows consolidation, the voters of the area concerned must agree to the consolidation of governments. An excellent example of a consolidated government, which has been working well since 1968, is Jacksonville-Duval County.

The Fourteenth Amendment of the U.S. Constitution guarantees citizenship at birth to almost all who are born in the U.S. and its territories. A U.S. citizen is a native-born or a naturalized person who owes allegiance to the U.S. and is entitled to its protection. Those born outside the U.S. to parents who are U.S. citizens are also recognized as citizens. U.S. citizenship is conferred on foreign citizens through a process called naturalization. Citizens of foreign countries who move to the U.S. are sometimes called “aliens.”. They enjoy the same freedoms and rights of U.S. citizens except they do not have the right to vote. (Benchmark: SS.7.C.3.7)

An old Chinese proverb says, “Give a man a fish and he’ll eat for a day. Teach a man to fish and he’ll eat for a lifetime!”
This philosophy was a belief of a true trailblazer of public education, Charles Moore McCurdy Jr. He was born in Titusville, Florida, and rose from poverty during the Depression to become a well-educated and determined man. He always wanted what was best for his family, students, and his community.
McCurdy served in the United States Army. He also earned an associate of arts degree from Florida Normal Institute and bachelor ‘s and master’s degrees from Florida Agricultural and Mechanical College (now Florida A&M University).

McCurdy was a teacher in north Florida from 1940 to 1948. When he moved to Belle Glade in 1949, he became principal of the first school (four rooms) for black children in Belle Glade, on what was known as the “Loading Ramp” on 5th Street between avenue c and d. McCurdy became the first principal at Lake Shore Elementary in 1950. In 1955, he became the first and only principal of Lake Shore Junior/Senior High School, where for 15 years, he counseled students about the importance of education.

When social change began to affect Palm Beach County, the Lake Shore and Belle Glade schools were integrated. Some schools had problems adjusting to the change, but McCurdy’s belief in non-violence set an example for the community. His expertise as an administrator, teacher, and leader set him apart.

When the two high schools in Belle Glade were combined and renamed Glades Central High School, McCurdy thought he would become the principal of the new school. He was very disappointed when he learned that he had been demoted to principal of the junior high school. McCurdy, feeling he was being treated unfairly, challenged the Palm Beach County school system in court. In 1974, McCurdy won the lawsuit and was named principal of Glades Central High School. A victory celebration was cut short by his death in August of 1975. Charles McCurdy believed that failure was not an option and that knowledge was the key to success. He is well remembered by the many people whose lives he touched.

Lawrence Shuler was born in Falco, Alabama, in 1876. He moved to Kelsey City (now Lake Park), Florida, as an adult. He came to Belle Glade from Kelsey City in September 1928, after a hurricane in the Glades left the town totally devastated. Only two buildings in Belle Glade survived the hurricane; the entire town had to be rebuilt. Mr. Shuler was a builder by trade, and he managed a lumber mill business in Kelsey City.
Mr. Shuler bought land and brought wood from Kelsey City to use to build apartments and houses in Belle Glade. His buildings were architecturally sound and could be recognized by their bi-level elevations. His buildings offered inside bath facilities to black residents for the first time in Belle Glade.
His wife Ada stayed behind with their only child Arlene in Kelsey City. In 1937, they joined Lawrence Shuler in Belle Glade. The Shuler family lived in a stylish residence that sat high above the ground on pilings covered by lush shrubbery and with metal shutters on all windows.
Most people remember Mr. Shuler as the richest man in “Colored Town” (called such because at that time sections of town were not integrated). He had many businesses, including a farm, a night club, a loan business, a store, apartment buildings, and a baseball team. He is also remembered because he helped the City of Belle Glade build its first bridge. He reportedly gave the city $10,000 for the bridge. He also provided wood from his saw mill for the construction project.

It is believed that it was because Mr. Shuler was black that his name was not written on the bridge with a marker, as is the usual practice. His name was written underneath the bridge. Members of Mr. W.C. Taylor’s Boy Scout Troop would walk to the bridge to see Mr. Shuler’s name. Residents of “Colored Town” called the bridge “The Shuler Bridge.”

On December 15, 2003, the Belle Glade Commission, at its regular meeting, voted unanimously to re-name the bridge across the Hillsboro Canal at West 5th Street, The Lawrence Shuler Bridge.

From Bridge Builder: A Story of Lawrence Shuler ©1994. 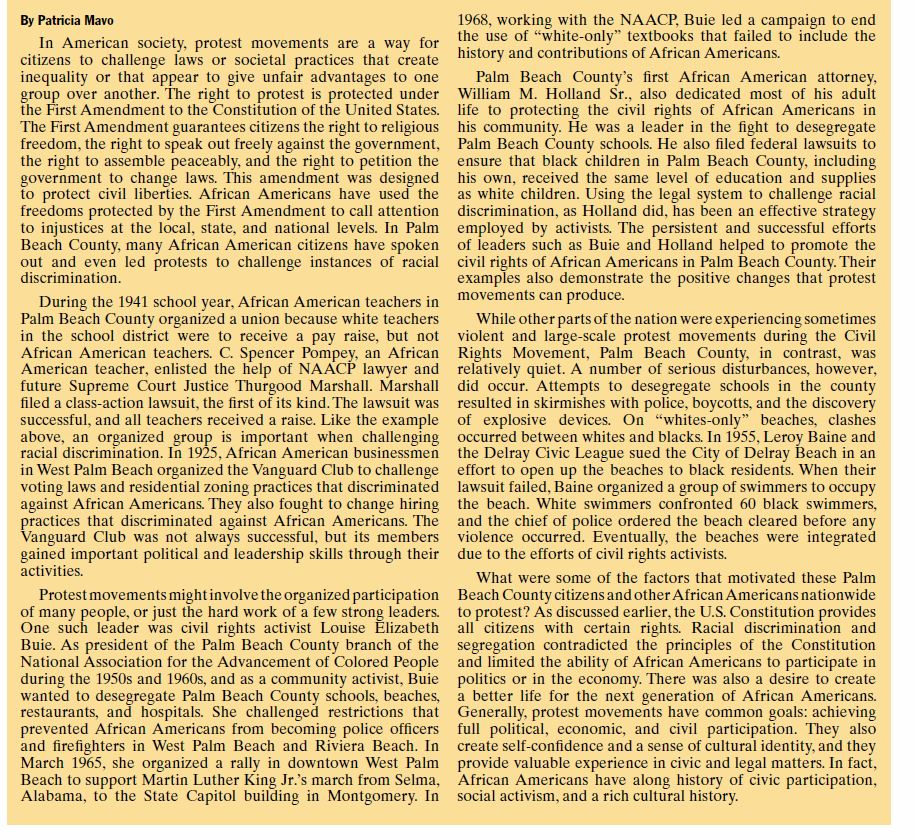 William Meredith “Bill” Holland Sr. was born in Live Oak, Florida. His quest for a higher education led him to Florida A&M University, where he earned a bachelor of arts degree. During World War II, Holland served in both European and Asiatic Theaters of War. He applied to the University of Florida Law School but was denied entrance because of his race. He challenged the system and was given free tuition at a university of his choice. Holland chose Boston University Law School, where he received his Juris Doctorate.

While at Boston University, Holland became acquainted with Martin Luther King Jr. The Honorable Thurgood Marshall also served as his mentor, charting his strategic plans for civil rights that would become his life’s work. Holland was asked to join Marshall and the NAACP Legal Defense League, where they worked to fight racial injustice.

In 1951, Holland became the first African American attorney in Palm Beach County, and its first African American municipal judge from 1972 to 1977. In 1996, he became the first black in Palm Beach County to have a public building named in his honor, the Fulton Holland Educational Service Center, which is the administrative site for the School District of Palm Beach County. As a fitting tribute, Holland was chosen to be an Olympic torchbearer the same year. Of the many awards Holland received, he was most proud of the Harriet S. Glassner Freedom Award for lifelong devotion to civil liberties.

Evaluate the obligations and responsibilities of citizens as they relate to active participation in society and government.

1. What do you think is the most important responsibility of a citizen? Explain your point of view.
2. Is there a rule at your school that you would like to change?Explain the rule and why you feel it needs to be changed.

Write about a time that you experienced, witnessed, or read about an act of discrimination. Be sure to include the event, the people involved and the outcome.